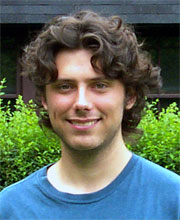 The Jacobian Map on Outer Space

Abstract: The outer automorphism group Out(Fn) of a finite rank free group admits a proper, cocompact action on a contractible space Xn known as Outer space. Likewise, the outer automorphism group GL(n,Z) of a finite rank free abelian group admits such an action on the homogeneous space Yn of positive definite quadratic forms. Both spaces have been used to study the homology of the respective groups. In this thesis, a Jacobian map J from Xn to Yn compatible with the two actions is investigated. The image of J is discussed. It is shown that the preimage of Soulé’s well-rounded retract of Y3 is a deformation retract of X3. The quotient K of this preimage by the kernel of the natural map from Out(Fn) to GL(n,Z) is an Eilenberg-MacLane space for this kernel. A 2-dimensional subspace Ã of K is found whose integral homology groups surject onto those of the kernel. The kernel of the map H2(Ã;Z) to H2(K;Z) is shown to be generated by two elements as a GL3(Z)-module.