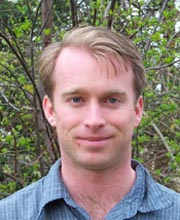 Abstract: In a recent paper, John H. Hubbard and Peter Papadopol study the dynamics of the Newton map, $N:\mathbb{C}^2 \rightarrow \mathbb{C}^2$, for finding the common zeros of two quadratic equations P(x,y) = 0 and Q(x,y) = 0. The map N has points of indeterminacy, critical curves, and invariant circles that are non-uniformly hyperbolic. Most of the work in their paper is spent resolving the points of indeterminacy of N, and creating a compactification of $\mathbb{C}^2$ in a way that is both compatible with the dynamics of N and that has "tame'' topology. This part of their work requires two very technical tools called Farey Blow-ups and Real-oriented blow-ups. In a different direction, Hubbard and Papadopol show that the basin of attraction for each of the four common zeros of P and Q is path connected. However, most further questions about the topology of these basins of attraction remain a mystery.

The dynamics of N is much simpler if the common roots of P and Q lie on parallel lines, for instance when P(x,y) = x(x – 1) = 0 and $Q(x,y) = y^2+Bxy-y=0$. The first component of N depends only on x, while the second component depends on both x and y. Many of the complexities described by Hubbard and Papadopol disappear: one must still do an infinite sequence of blow-ups in order to make N a well defined dynamical system, but one can avoid the Farey Blow-ups and the Real-oriented blow-ups.

In addition, for the parameter values B that are not in the bifurcation locus—which is exceptional in the sense of Baire's Theorem—the statements above remain true if we replace the closures of the basins with the basins themselves.