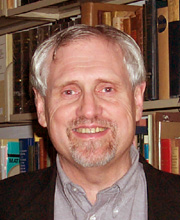 Most of my research has been in the field of algebraic K-theory. This field is, in some sense, a fancy generalization of linear algebra to arbitrary rings. As such, it has applications in many other areas of mathematics such as topology, algebraic geometry, and even the theory of Markov processes. I have been most interested in the computational aspects of the subject, in particular, the computation of quotients of rings of algebraic integers and in the computation of the Whitehead group for finite abelian groups.

Parts of this work have involved the use of computers to understand a number of examples before formulating and proving the general results. This work has led to the study of questions about group rings, number theory, and theory of finite groups. My current interest lies in studying a number of problems relating to commutators, structure, and invariants of finite groups which can be investigated by computer computations.

While I was executive editor of Mathematical Reviews I became interested in problems dealing with mathematical communication, databases and mathematical bibliography, and how to convert the older mathematical literature into searchable electronic form. I have mainly been involved with these issues during the last several years.

Computation of the Scharlau invariant (with Paul Young), in preparation.

Homogeneous functions and algebraic K-theory (with R. Laubenbacher), in preparation.

The number of groups of order n, in preparation.