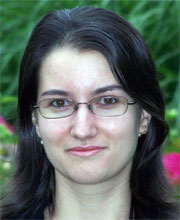 Consider the family of complex H\'enon maps $H(x,y) = (p(x) - ay, x)$, where $p$ is a quadratic polynomial and $a$ is a complex parameter. Let $\mathbb{D}$ be the open complex unit disk and $U^+$ the set of points that escape to infinity under forward iterations of the Hénon map. The analytic structure of the escaping set $U^+$ is well understood from previous work of Hubbard and Oberste-Vorth as a quotient of $(\mathbb{C}-\overline{\mathbb{D}}) \times \mathbb{C}$ by a discrete group of automorphisms $\Gamma$ isomorphic to $\mathbb{Z}[1/2]/\mathbb{Z}$. However, the boundary $J^+$ of $U^+$ is a complicated fractal object, on which the Hénon map behaves chaotically.

We show how to extend the group action to $\mathbb{S}^1\times\mathbb{C}$, in order to represent $J^+$ as a quotient of $\mathbb{S}^1\times \mathbb{C}/\Gamma$ by an equivalence relation. We analyze this extension for Hénon maps that are small perturbations of hyperbolic polynomials with connected Julia sets.

The proof uses results of Lyubich and Robertson about the critical locus for Hénon maps and it requires a careful analysis of the invariants of the Hénon map. We discovered an invariant function of the Hénon map, which we called $\alpha$. We developed and implemented an algorithm for computing $\alpha$. We studied the degeneracy of $\alpha$ as the Jacobian tends to $0$, and came up with an interesting relation connecting the function $\alpha$ with the group action on $\mathbb{S}^1\times\mathbb{C}$.