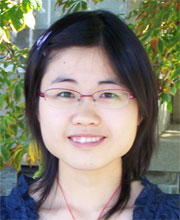 Random walks on some classes of solvable groups

In the first part of this dissertation we determine the behavior of the return probability of simple random walks on the free solvable group Sd,r of derived length d on r generators and some other related groups. In the second part, we study the decay of convolution powers of a large family µS,a of measures on finitely generated nilpotent groups. Here, S = (s1, . . . , sk) is a generating k-tuple of group elements and a = (α1, . . . , αk) is a k-tuple of reals in the interval (0, 2). The symmetric probability measure µS,a is supported by S∗ = {smi, 1 ≤ i ≤ k, m ∈ Z} and gives probability proportional to

to s±m, i = 1, . . . , k, m ∈ N. We determine the behavior of the probability of return µ(n) S,a(e) as n tends to infinity. This behavior depends in somewhat subtle ways on interactions between the k-tuple a and the positions of the generators si within the lower central series Gj = [Gj−1, G], G1 = G. In the third part, we prove tightness properties of some random walks on groups of polynomial volume growth
driven by spread-out measures, including the measures µS,a studied in the second part.